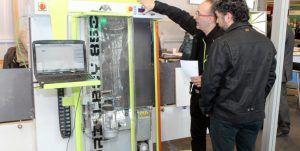 Vertimaq introduces Drillboy1000, a vertical cnc drill for the manufacture of kitchens and cabinets. High-tech, made in Spain.
It is a flexible machine for the manufacture of custom furnishings, which allows front and edge perforations, milling and even edge grooves, in pieces up to 1000 mm. High, without limitation of length, admitting thickness of up to 50 mm.
Its new CNC control designed and developed by the company itself, operates with a closed circuit that manages the movements of the four axes of the machine; Its interface with the operator can be a simple and intuitive screen or a tablet with Windows system, and is equipped with a series with its barcode reader pistol.

The software, part design, also of exclusive development, is very intuitive, is installed on any office computer, being able to prepare all the pieces to be machined in a folder, the files are loaded on a pendrive and are transported. By machine, or in case of using the tablet, they can be sent to the control via wi-fi from the office. The program allows the printing of barcode labels, once the machining files are generated, in this way each piece is identified at the time of cutting it, and then the reader is used for the program to automatically search for the part to be machined.

This eliminates the errors and process times.

VERTIMAQ in his recent participation in the FIMMA fair in Valencia. 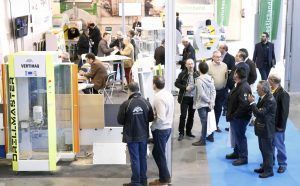 Having the independent software, it avoids the downtime of the programming in the foot of the machine, because it is independent of an operating system like Windows, thus avoiding problems of the computer that can cause stops or complications in the machine. Worst-difficult solution on the part of the user. In this way, the machine is never obsolete with respect to your operating system and alien to any type of computer virus.
In terms of consumption and space it occupies, a record in its type, since the work consumes less than 1kw and occupies only 2.5 m2 of workshop surface.
Vertimaq has put in the new Drillboy all its accumulated experience and a technology development of the latest generation, from the CNC, through the axis movement systems, to its exclusive 6-tool multifunction head, with electronic probe, always paying attention to everyone. The important aspects that are needed today in custom carpentry.

The head has a built-in electronic probe system, which allows to correct the position of the mounting holes with respect to the small parts demarcations in their four vertices, as well as the differences in the cut length of them.

Costs do not include shipping

Attention all year round.